Cycling in the Mountainous Heart of Japan

Enjoy the sights of a mountain town surrounded by the beautiful nature of the Japanese Alps.

It is Friday morning, and I am up early, ready to cycle among the Japanese Alps. I wanted to check out Azumino as it has a reputation as a great place to experience the tradition and remarkable beauty of rural Japan, home to one of the largest wasabi fields in the country and an excellent location for cycling. So, I was excited to get my trip started. Azumino is in the centre of Nagano and benefits from rain and snowfall that contribute to the pure water used in agriculture. The open areas and beauty of nature attracted numerous artists and craftsmen who have made it their home. I set out prepared for high-altitude sightseeing with a bottle of sunscreen and a litre of water for a day of biking in the mountains.

When I stepped off the train, I was pleased to see a rather unique-looking station. Hotaka station was built to resemble its namesake Hotaka Shrine and is one of the most unique train stations I’ve seen in Japan. After I passed through the station gates, I was greeted by a beautiful blue wide-open sky that sat perfectly juxtaposed with the green slopes of Mt. Chougatake, Mt. Jonen and Mt. Tsubakuro.

Lying under this undisturbed open sky, the flat landscape of Azumino is a perfect place for cycling. Rice fields and orchards seem to extend endlessly along the base of the Japanese Alps, and numerous sightseeing spots are scattered about them. Cycling is one of the easiest ways to travel from spot to spot and affords a unique opportunity to stop and take in the scenery along the way.

To promote cycling, the city has a game-like plan called Azumino Cycle Rogaining. You visit areas on the map and receive points for each visit. Once you have enough points, you may receive some locally produced goods or even an overnight stay!

There are several bicycle rental shops around Hotaka Station, which are open from April until December. The local tourism association also has a share-cycle program, which allows you to drop off/pick up bicycles in designated areas. The latter sounds like an excellent option if you want to combine bus rides or taxis into your plan or you do not want to return to your starting point. But I was here for the cycling experience, so I headed straight for the bike rental shop Shinano-an. Share-cycles outside of the local tourism association 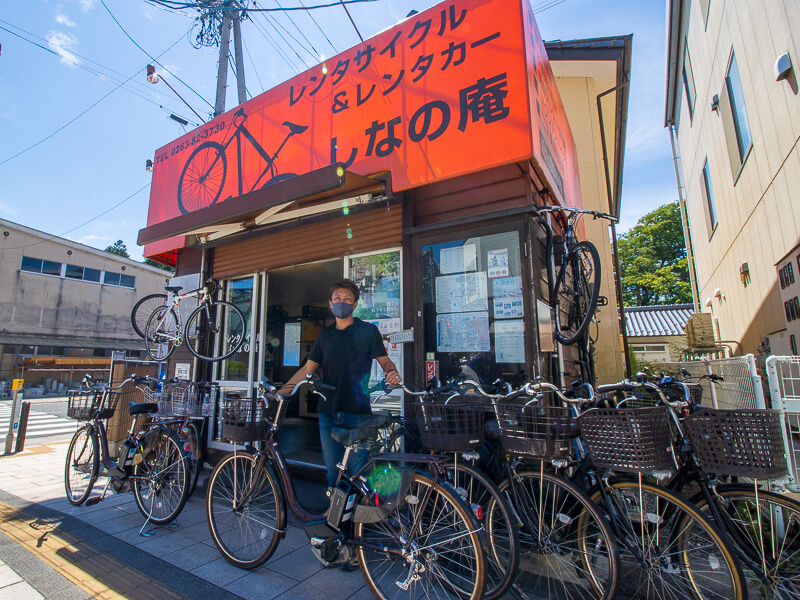 For rentals, I had two options: a cross bike or an e-bike. Having never ridden an e-bike before, I chose the latter. From the first push of the peddle, I was surprised by how powerfully it propelled me forward. It felt jarring at first, but after taking a small hill, I immediately saw the benefit. The e-bike easily climbed uphill with little to no effort on my part.

As I rode along the scenic paths, flanked by rivers of pristine mountain water, I passed by a small fishery of Nijimasu salmon. With the early morning sun rising to its zenith, the water glistened as the salmon swam in the cool water. Riding on, I came upon many incredible views of the Japanese Alps in the distance. When pausing to look down from the riverbank, I saw wasabi growing in the streams fed by clear water. Wasabi is a staple of Azumino's agricultural industry, and I would get a taste of it later. Many spots along the way offered me the opportunity to take some great photos of the mountains in the distance before I headed on through green waving fields of young rice. 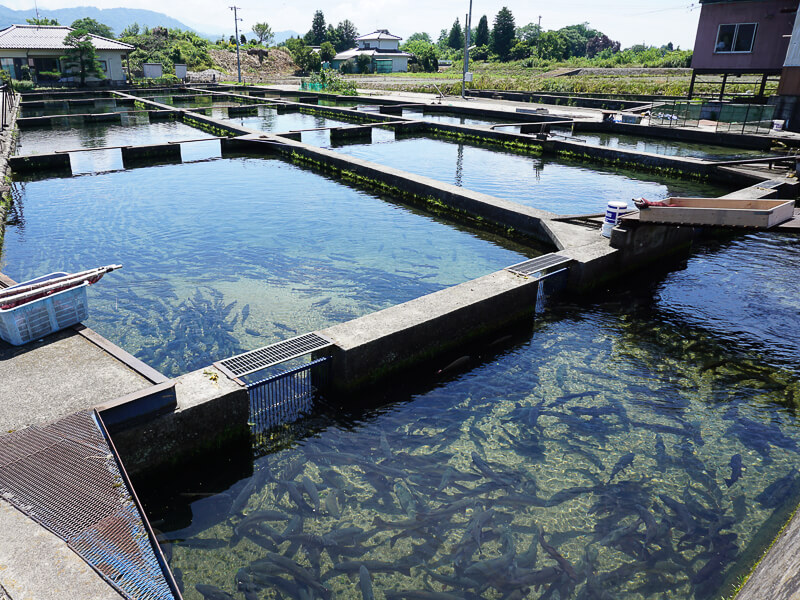 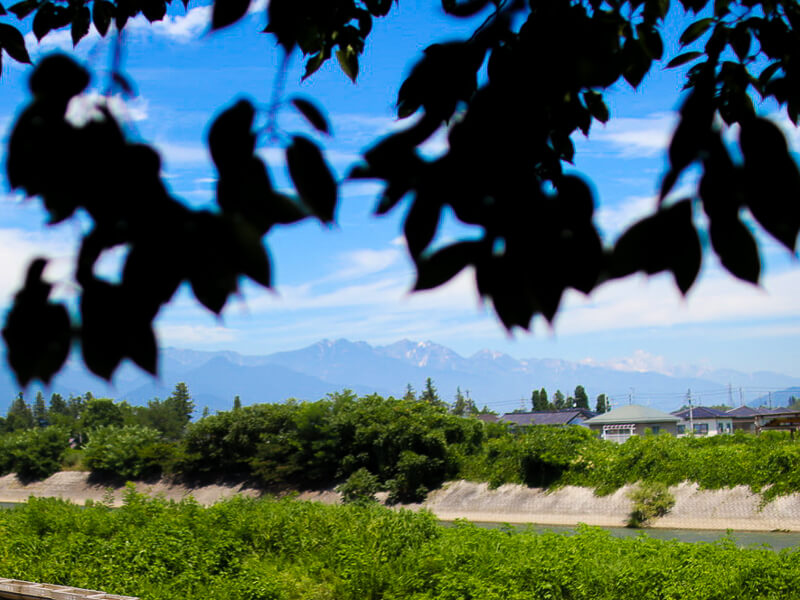 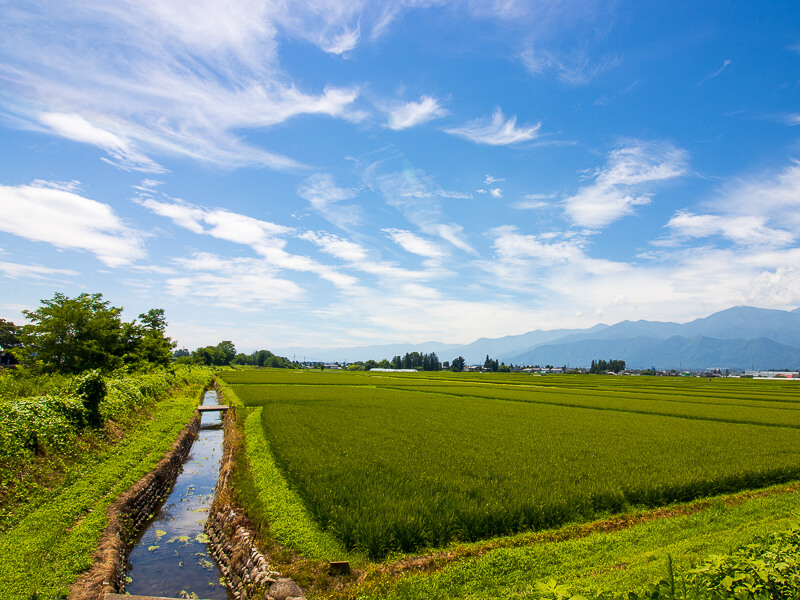 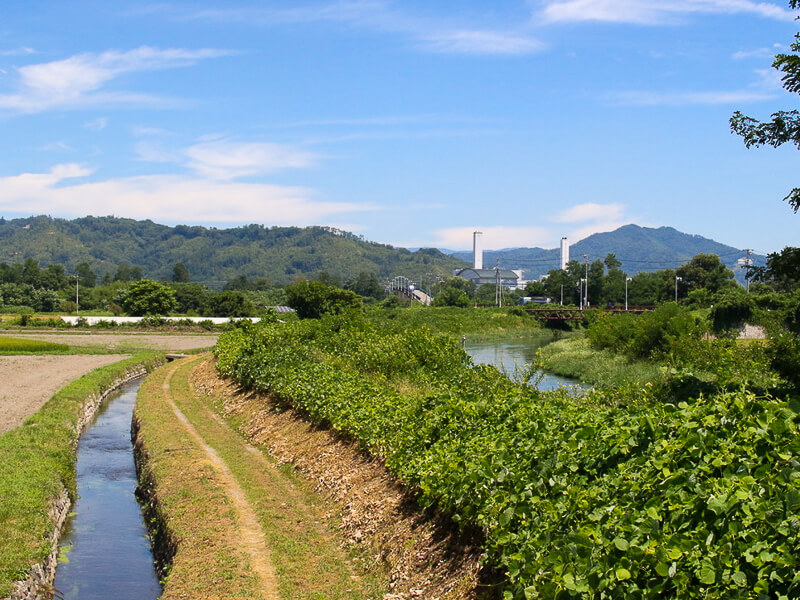 As I passed through the fields, I found myself musing over the occasional private garden I passed by and enjoyed seeing the many beautiful homes owned by the locals. Here and there, I noticed small paths leading off the chosen route, which piqued my curiosity. A part of me wanted to abandon the path and see where they might lead, but I pedalled onwards to my destination, the Daio Wasabi Farm, the largest wasabi farm in the world.

A large statue of wasabi at Daio Wasabi Farm

Wasabi has a long history in Japanese culture. First used as a medicinal herb, it eventually found its way into Japanese cooking, flavoring soups and garnishing a variety of dishes. Wasabi not only has a strong and unique flavor but anti-bacterial properties as well—one of the reasons it is so often paired with raw fish such as sushi and sashimi. You’ll see dollops of wasabi accompanying other popular Japanese dishes like soba, yakiniku, unagi, chazuke and more.

To grow wasabi, you need two things: plenty of shade and tons upon tons of cold, free-flowing water. It is no wonder why Azumino has so much wasabi! The pure spring water of Azumino comes from snowmelt in the Japanese Alps that feeds underground springs that surface in the rivers where Azumino's wasabi is grown. It is famously known as one of Japan's 100 remarkable waters.

The Daio Wasabi Farm was created to take advantage of the spring water. Founded in 1915, it started as a patch of gravel and cultivated into the large fields visitors can see today, even used in acclaimed director Akira Kurosawa's film Dream in 1990. At the Daio Wasabi Farm, over 15 hectares of wasabi lie with great care under cover, protected from the sun. Over time the farm attracted more and more tourists prompting the owners to develop a space for several restaurants and souvenir shops. 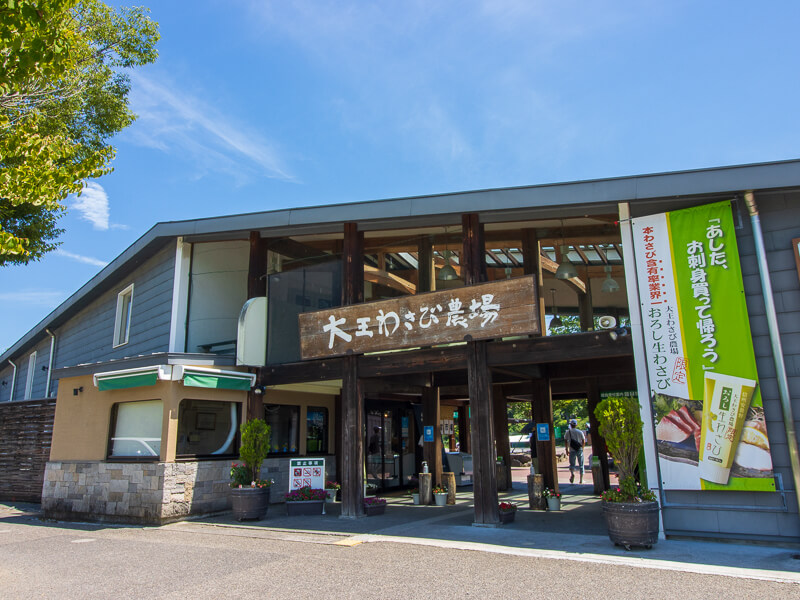 The entrance to Daio Wasabi Farm 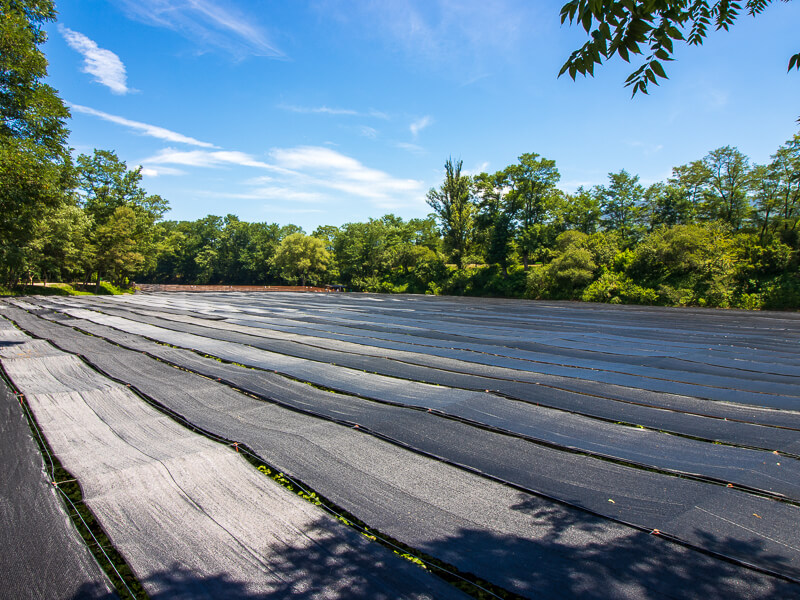 Fields of wasabi are shaded in summer to keep them cool

The waterwheel that famously appears in Akira Kurosawa's film Dream

After checking the area out, I sat down for lunch at Restaurant Oasis and had the steak with demi-glace sauce and freshly grated wasabi. While I had had wasabi many times over the years, today it tasted... different. It wasn’t eye-wateringly spicy like your usual wasabi paste. It was much more subtle with an almost sweet aftertaste. It was refined and paired very well with my meal.

After lunch, I opted for coffee at DAIO’s CAFE. They brew it using the Azumino's famously pure water. The coffee was light and very refreshing, and I can still remember the taste of the pure water on my lips. After lunch, I headed on to see the vast field art of Azumino.

I took a side road through more fields with grand sweeping vistas of the Japanese Alps on either side of us. But taking in the views and the feel of the mountain air helped make the ride relaxing and refreshing.

When I arrived I was greeted and shown to the top of a carefully constructed scaffold. Nothing can prepare you for how impressive an accomplishment the rice paddy art is. It took over 300 people and four days of planting to prepare the field. They plant seven different types of rice to create the colour. Using markers, they plan out where each kind of rice goes. As they grow, their colours combined to create a work of art that can be seen perfectly from the top of the scaffold.

When I descended the scaffold, I watched a video and looked at the pictures of how they placed the markers for planting. The rice paddy art may not be held in Azumino next year as the event is still new. Under the afternoon sun, I biked to the Azumino Glass Studio.

The glass studio is behind Azumino Commune Tirol, where you can get lunch and a drink at the cafe as well as agricultural souvenirs, like wasabi salad dressing. In front of the building is a fountain overflowing with the pure water of Azumino. It was cold and refreshing and after cooling myself off with the pure water, I headed through to the glass studio.

The workshop was established in 1985 as a collaboration between the Tama Art University Craft Design Study Group and the former Toyoshina Town. Employment in glass craft is difficult to find for inexperienced graduates, so this studio positioned itself as a place for graduates to work and hone their skills. Five graduates work here on five-year terms before leaving to find other employment and make room for new members.

The studio itself is full of original works created by the staff as well as a few staples of the studio. They also have glass-making classes, where you can make a personal souvenir. You get to choose from four designs, colours, and styles, and the entire experience takes about 20 minutes guided by their expert hands. There is no English instruction, but English descriptions are available and the staff will do their best to communicate with you. 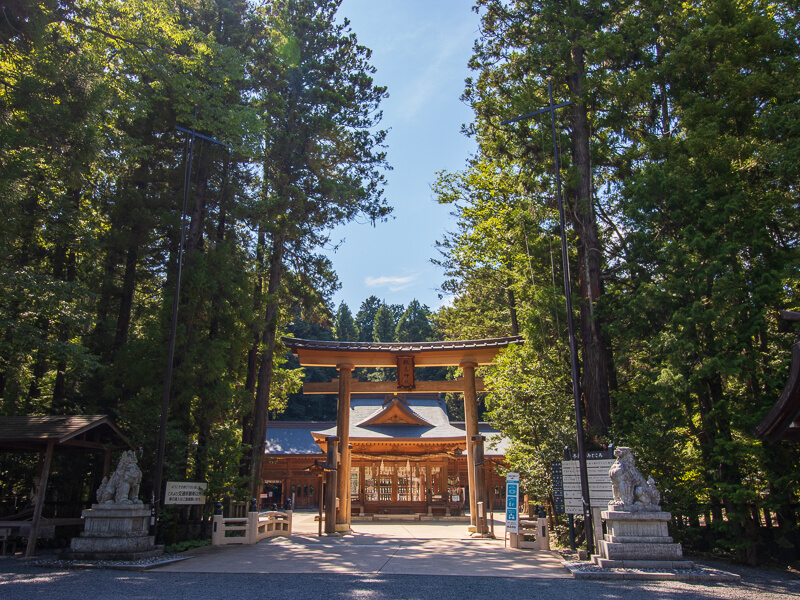 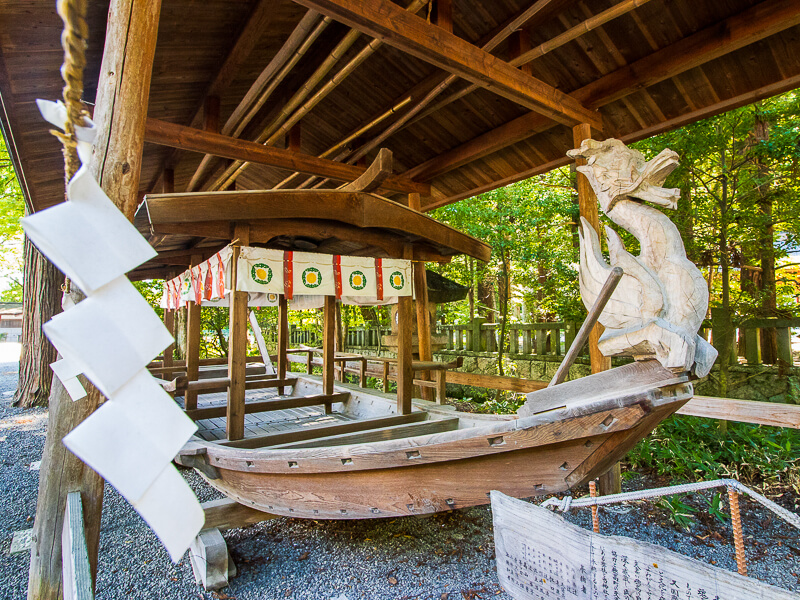 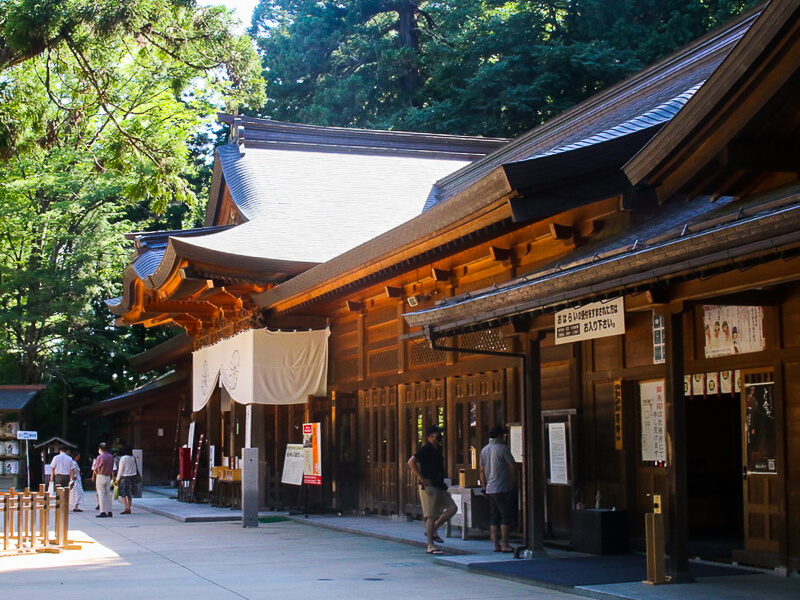 As you approach the shrine, you will come upon a reconstruction of a boat on your left, which may seem a bit odd this far in the mountains. According to history, the Azumi were a sea-faring people from Kyushu that migrated into the mountains of Nagano. Their memory is kept alive at Hotaka Shrine.

Even today, the god of the shrine keeps this connection to transportation, more specifically, traffic safety. When you buy a new car, you can drive it through the torii gates to be sanctified. Even hikers in the area will come to the shrine to pray for safety while hiking. I should have paid a visit here before setting off on my day-long bike ride!

The atmosphere of the shrine feels like a silent oasis. From the moment when you pass through the Torii gate, all outside sounds go still, blocked by the imposingly tall trees surrounding the shrine, and the sacred tree near the main shrine is awe-inspiring. I have always loved these trees at every shrine I have visited in Japan. Their great height and wide trunks of the trees speak to the solemnity and age of the place. My visit coincided with a windchime festival, and numerous chimes were hanging in the center of the shrine grounds.

By now, I was a little ahead of schedule, so with extra time before my train arrived, I decided to cycle over to the Rokuzan Art Museum. The museum opened in 1958 for storing and publishing the works of Moriye Ogihara, aka Rokuzan, a native of Azumino city. He was the pioneer of western-style brass sculpture in Japan.

The museum grounds are full of greenery, works of art and beautiful brick buildings. Among them, the Rokuzankan is a gorgeous chapel-like structure that houses many of Rokuzan's famous works, like the Portrait of Torakichi Hojo and The Miner. After so much time in the saddle, being able to sit down on a bench and take in these beautiful works of art was invigorating. The quiet serenity and shade made for a great end to the day.

The best part of my trip to Azumino was the freedom that cycling brought; being able to go where you want and to take your time to immerse yourself in the natural landscape was very liberating. Thinking back on the sights of the day, I realized I got to see it all. The breathtaking views of the Japanese Alps, the refreshing taste of wasabi at the Daio Wasabi Farm, the fantastic craftsmanship of Azumino Glass Studio and the calming presences of Hotaka Shrine and the Rokuzan Art Museum. Azumino is a microcosm of Japanese rural beauty, with art and history abound. I can’t recommend enough that you come and visit, hop on a bike and experiencing these wide-open spaces in the heart of the Japanese Alps.

Follow in the Secret Footsteps of Nagano’s Silent Ninjas

Six Ropeways to the Roof of Japan

5 of Nagano's Most Beautiful Drives

A Two Day Trip to Norikura and Kamikochi

The Best Places to Go Snowshoeing in Nagano

See Nagano in a New Light with Aerial Photography by Drone