Discover Nagano’s role in the Sengoku-Jidai, when samurai warlords from across the country fought for hegemony

During the Warring States Era, or Sengoku Jidai, samurai warlords from throughout the country fought for control of Japan.  Starting in 1467 with the collapse of the Ashikaga shogunate, the conflict was basically ended when Tokugawa Ieyasu (1543-1616) consolidated power at the Battle of Sekigahara in 1600, ushering in the Tokugawa shogunate which controlled Japan for the next two and a half centuries.  Nagano Prefecture, then known as Shinano Province, was the site of several major power struggles.  Here are the best places to understand Nagano’s dramatic samurai history during the Warring States Era.

While you may expect one of Nagano's most famous sightseeing spots, Matsumoto Castle, to be on the list, it was actually completed well after the end of the Warring States Era in 1635, having begun construction 43 years prior.  As such, it is more of an administrative center than a defensive fortress.  Sengoku Jidai castles tended to be mountain-top fortresses used primarily in times of war.

Hayashi-Jo: the Hilltop Fortress Above Matsumoto

In fact, the main fort of the Ogasawara Clan, the designated protectors of the Shinano Province during the Warring States Era, was located atop a hill on the eastern side of the Matsumoto Basin.  Called Hayashi-jo, it was fortified in the typical fashion of the times, with earthen embankments surrounding an enclosure, protected by trenches and ditches to thwart attacks and to provide defensive positions.  It stretches for a whole kilometer from east to west, indicative of the importance of the Ogasawaras, and is a designated national historical site.  The Ogasawaras built Hayashi-jyo in the late 1400s, but with the warlord from the Mt. Fuji area Takeda Shingen (1521-1573) threatening to invade, they tore down their own castle in 1550 to keep it out of Shingen’s hands.

The Kanehana trailhead to Hayashi-jo is located 4.3km east of Matsumoto Station.  To access by bus, the Satoyamabe Shucchosho-mae (里山辺出張所前) bus stop on he Iriyamabe line is 650 minutes (10 minutes on foot) north of the trailhead.  The trail starts at the base of the mountain, elevation 638m, and steeply climbs to main enclosure, 844m, passing numerous examples of trenches and ditches along the way, plus the remains of the earthen embankments.  Some of the original rockwork is still visible.  Along the way are vistas of the Matsumoto Basin, including of Matsumoto Castle, which show how well of a lookout Hayashi-jo was. 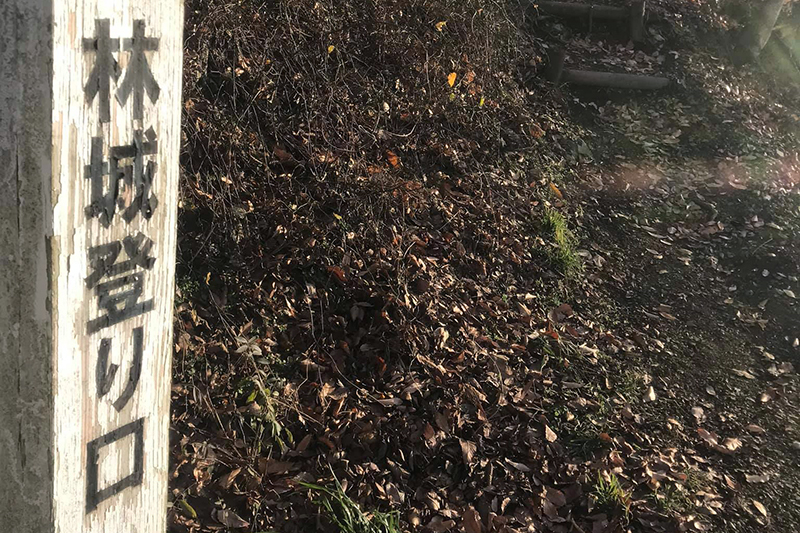 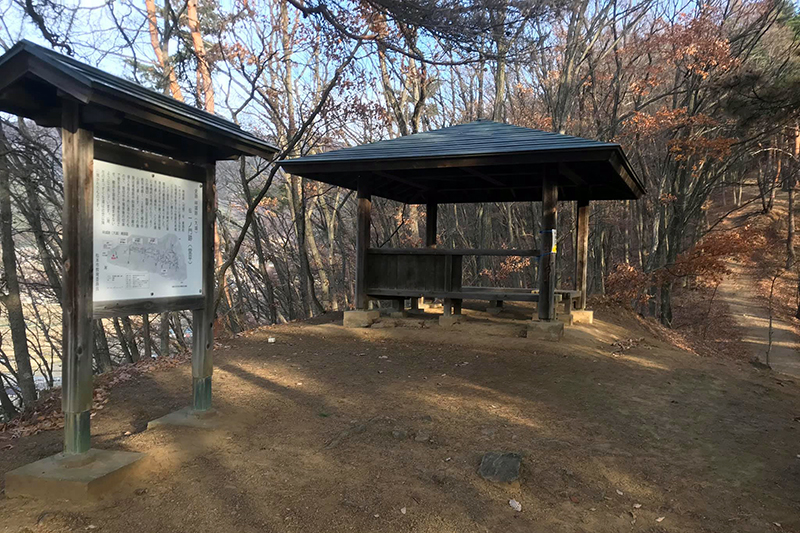 Location of the first gate 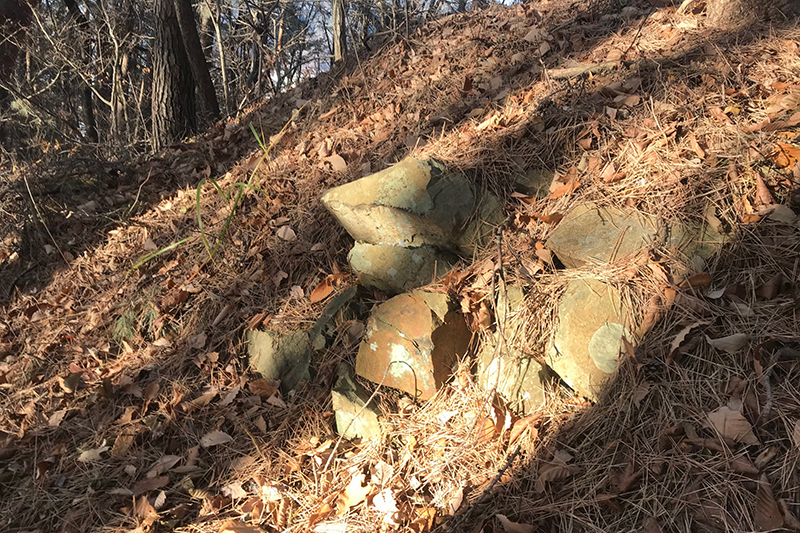 The top enclosure with earthen embankments 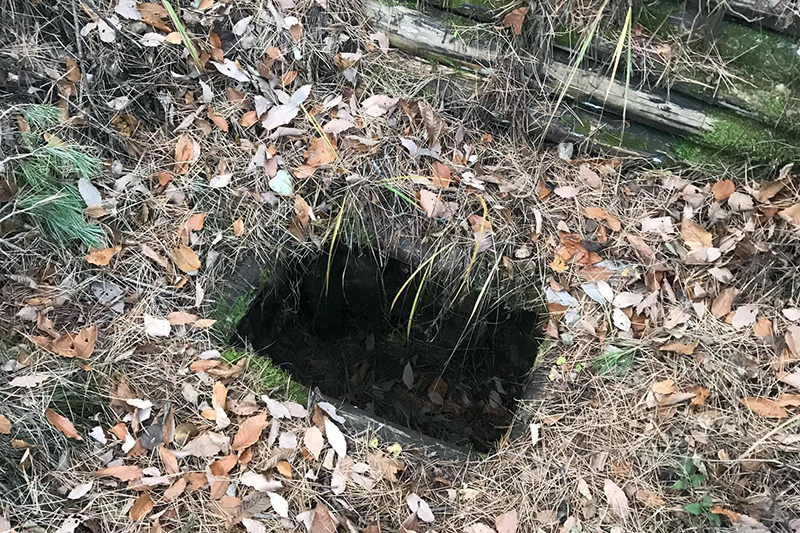 The well on the north side of the top enclosure 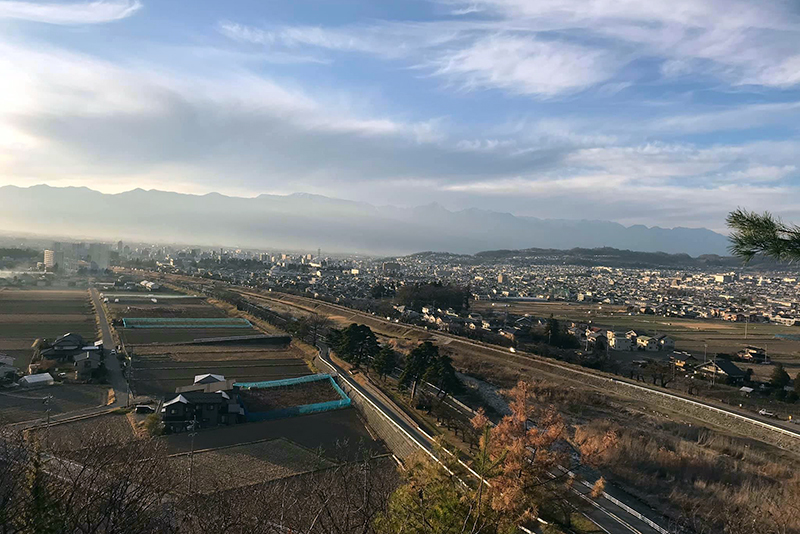 Panoramic view from Hayashi Castle across the Matsumoto Basin Arata-jo Castle: an Impeccable Recreation of a Mountain Fortress

To see what a mountaintop fortress would have looked like in its entirety, head over to Arato-jo Castle on the hill behind onsen town Togura-Kamiyamada.  Arato-jo was reconstructed in 1995 to replicate the original fortifications that existed on the same site in the early to mid-1500s.  It is complete with stone baileys, formidable gates, a lookout tower, and low-slung wood buildings in the upper enclosures that were built so as not to be visible from below.  A video presentation explains the structures common to hilltop forts, as well as the specific history of Arato-jo.  (The afore-mentioned Takeda Shingen played a major role here, too.)  You can also enjoy a panoramic view of the Chikuma River Valley down below.

Access is via Togura Station on the Shinano Railway line.

Approximately 23 km downriver from Arato-jo is the Kawanakajima Battleground. This is the site of a series of battles that took place in 1553-1564 between Takeda Shingen and his major rival, Uesugi Kenshin (1530-1578) from the Sea of Japan side.  At the historical site is a statue portraying one of the most famous scenes of the Sengoku Jidai.  Shingen had been camped out on one side of the Chikuma River, and Kenshin had taken up a position in a mountaintop fortress on the other side.  In the middle of the night, Shingen had his general Yamamoto Kansuke (1501?-1561?) take a group of men to sneak across the river to make a surprise attack at the fortress.  However, Kenshin had a premonition of their proceedings, and sent his men down first so the general ended up arriving at an empty castle.  Meanwhile, Kenshin led his men across the river and ended up suprising Shingen and his remaining fighters, leading to the legendary scene of Kenshin barging in on horseback, waving his katana sword that he’d been polishing for 10 years just to chop Shingen’s neck off.  One of Shingen’s retainers fended Kenshin off with a spear but ended up missing and was so frustrated he jammed his spear into a rock – you can go there today and see the rock with a hole in it!
(The Kawanakajima Battleground can be accessed by twice-hourly bus from Nagano Station.) 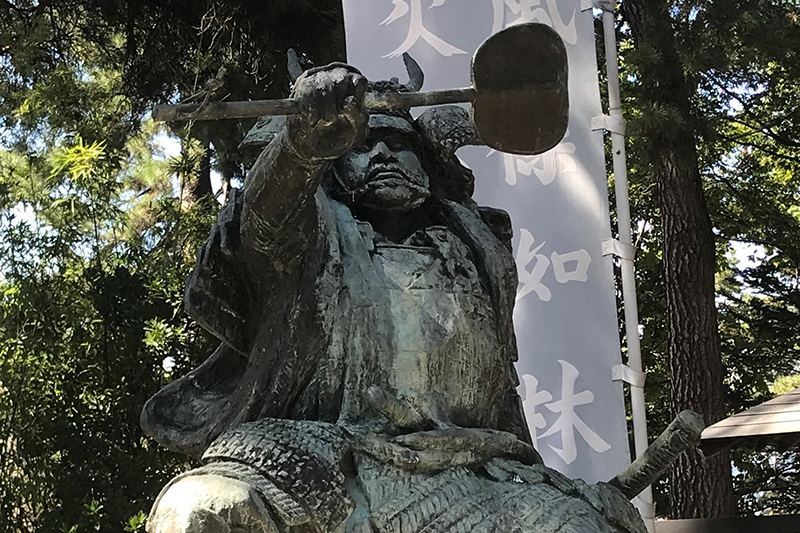 The rock with the hole in it

As part of his advance on the Shinano Province, Takeda Shingen had invaded the Ina Valley in the south and took control of Takato Castle in 1545.  Shingen had his legendary general, Yamamoto Kansuke, rebuild Takato Castle into a more formidable structure.  Today the castle remains are famous for cherry blossoms in early April with well-preserved moats and stone baileys.  During the Warring States Era it was one of major fortifications of the Ina Valley after Shingen’s death in 1573.

With the Takeda Clan on the decline his son put Nishina Morinobu (1557-1582) in charge of Takato Castle as the last defense of the region.  In 1582, attacked on three sides and with many generals defecting and two nearby castles easily falling, Morinobu rejected surrender and resisted with only 3,000 men against the opposition army of over 50,000 men.  Despite fighting bravely, Morinobu and the castle fell but his loyalty is respected by the locals to this day.

Access to Takato Castle is via bus from Inashi or Inakita Stations on the JR Ina Line.  Expect crowds if during cherry blossom season.

Meanwhile in eastern Nagano Prefecture the Sanada Clan survived the turbulence of Shingen and Kenshin through intelligent tactics and noble bravery. Sanada Masayuki (1547-1611) built Ueda Castle in 1583 and the formidable construction of the castle, with the Chikuma River as the barrier on one side, allowed him to repel attacks by the Tokugawa army not once, but twice. The second time, in 1600, he fended off 38,000 Tokugawa warriors with only 2,500 defenders. This delayed part of the Tokugawa force from joining the era-changing battle of Sekigahara.

Ueda Castle today is a combination of original guard towers and stonework, and reconstructed fortifications but with no central donjon.  The well in the main enclosure is rumored to have a secret tunnel leading to a temple outside the gates so samurai and goods could be moved in case of a siege.

Access to Ueda Castle is on foot from Ueda Station on the Hokuriku Shinkansen line.

In one of the most dramatic family stories of the Warring States Era, Masayuki had his two sons join opposing sides on the battle of Sekigahara, with Sanada Nobuyuki (1566-1658) on the east and Sanada Yukimura (1567-1615) on the west.  While making the siblings enemies of each other, that way the Sanada family name would be preserved.

Nagano’s Sengoku Jidai history is full of such heroic stories and legendary battles.  Use this list to start your exploration.

15 of the Best Places to Visit in Nagano

How to Enjoy Yamanouchi in Winter