Ascend Into An Inferno: Climb a Volcano

Does the thrill of climbing an active volcano appeal to you?  Nagano has not one, not two, but three mountains in various states of high volcanic activity that you can climb.

The 2568-meter tall Mt. Asama towers over Eastern Nagano, and is easily visible from its namesake Asama train on the Hokuriku Shinkansen line.  Volcanic plumes can frequently be seen rising from it’s peak and as recently as August, 2019 it had an eruption large enough for its Volcanic Level to be raised to 3.  It has since stabilized enough to be at Volcanic Level 2 at the time of this writing which means a 2-km exclusion zone.  If/when Volcanic Level 1 is resumed, climbers will be able to reach Maekake-Yama, the old crater ridge.  (The current crater rim is technically off-limits even at Volcanic Level 1 as the fumes emitting from crater could cause dizziness or even unconsciousness.)
Mt. Asama is basically 3 volcanoes on top of each other with its current crater being the main summit, the afore-mentioned Makekake-Yama the former crater, and Mt. Kurofu the original one.  It’s last catastrophic major eruption was in 1783 when lava flows killed approximately 1400 people.  Today it is a popular, if potentially dangerous, mountain to climb.

There are 2 main trailheads for climbing Mt. Asama:  Asama Sanso / Tengu Onsen down lower on the flank of the mountain at 1,410 meters, and the 2000m-high Kurumazaka Pass to the west.  Both are reachable by car via the ‘Cherry Park Line’.  For public transport, JR runs 2 busses per day from Sakudaira Station through central Komoro City stopping at ‘Asamayama Tozanguchi’ which is 4km from Asama Sanso, and Takamine Kogen Hotel at Kurumazaka Pass.  The trail from Asama Sanso is approx. 8km long and it takes around 3.5 hours to climb.  Being the ancient pilgrimage route it passes through the 1st and 2nd wooden torii gates.

At the 4km mark is Kazankan, an emergency shelter and information center staffed by the amiable Kanda-san.

After 300 meters the path levels out to the Yundaira Meadow before rising above the tree level to Sainokawara.  From there it ascends the rocky volcanic cone.

One of the benefits of starting and ending at Asama Sanso is getting to soak in the lodge’s onsen baths.  Tengu Onsen, as the hot water mineral spring is called, is rich in iron content and has a unforgettably distinct reddish-brown color.

The trail from Kuramazaka Pass starts out at a higher elevation but is similar distance and ends up taking around the same amount of time due to a lot of up-down terrain.  At the Tomi-no-Kashira ridge the trail branches off for an alternative route over Mt. Kurofu and along the geologically-interesting J-Band.
Before going, be sure to check the current Volcanic Activity level with Japan’s Meteorological Agency’s website, http://www.jma.go.jp/en/volcano/.  Level 1 allows access to Maekake-yama, Level 2 to with 2km of the summit meaning Sainokawara.  Level 3 would mean a 4-km exclusion zone so only to the 1st torii gate from the Asama Sanso trailhead, while the trail from Kuramazaka Pass would be closed entirely.  For winter ascents, expect snow and prepare accordingly.

The only active volcano in Japan’s Northern Alps, 2455-meter tall Mt. Yakedake is one of the most popular day-trip climbs from Kamikochi.  Intrepid mountain climbers are treated to a view of the white volcanic steam rising from multiple fissures around the crater. The three-hour climb to the summit of Yakedake is a "must-do" hike for many mountaineers in Japan.
There are two main approaches from the summit, one from Nakanoyu Onsen and the other from Kamikochi. Known as the gateway of the northern Japanese Alps, Kamikochi is a picturesque valley situated at 1500-meter elevation along the banks of the turquoise blue Azusa River with the 3000-meter peaks of the Hotaka Range towering overhead. From the main bus terminal, the trail to Yakedake crosses Kamikochi's iconic "Kappa Bridge", named after the water sprites that supposedly inhabit the river. The bridge affords an iconic view up the river valley to the massive Hotaka Mountains. The course follows the river bank to the Weston Relief, a memorial to the missionary from Britain known as the Father of Mountaineering in Japan.

Past Tashiro Bridge, the path starts a steep ascent over rugged terrain with vertigo-inducing fixed ropes and steel ladders, eventually reaching the rocky summit for a rewarding panoramic view as well as a peak into the steaming caldera with its picturesque lake. 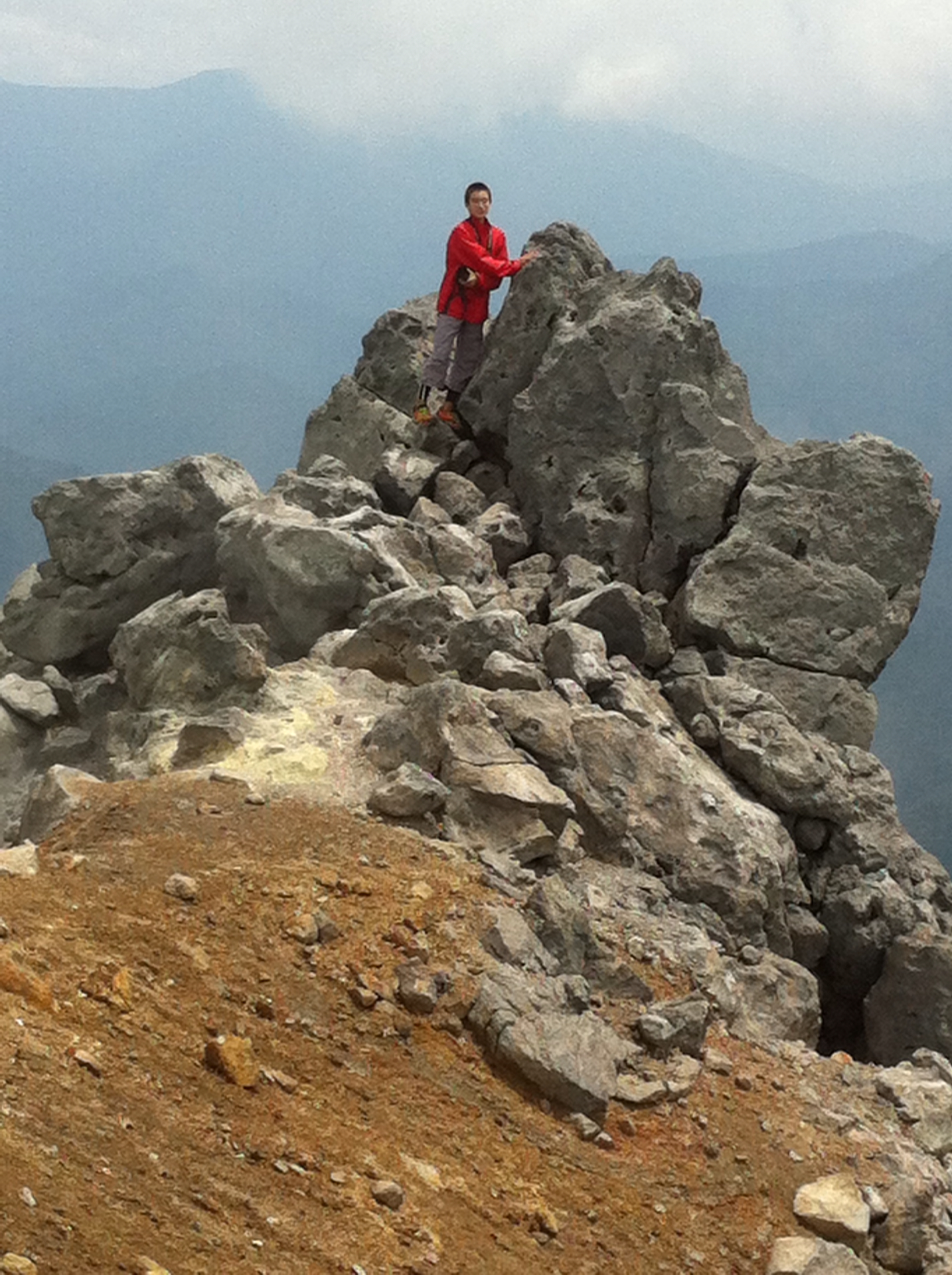 At 3063 meters, Mt. Ontake is Japan’s 2nd tallest volcano.  It is also considered one of Japan’s 3 holiest mountains.  And due to its September, 2014 eruption that killed 50 people, it is also one of the country’s deadliest peaks.  But it’s primal restlessness has calmed enough to warrant it’s volcanic activity to be lowered to Level 1.  That means no access to within 1 km of the crater, but as of this writing from early July to mid-October the Kurosawa-guchi trail to the Kengamine summit is exempt, hence accessible.
The most popular route is via the Ontake Ropeway (accessible by bus from Kiso-Fukushima Station) which will carry you all the way to an elevation of 2150 meters.

The remaining 900 meters in altitude to the top can be ascended via a 4-km long course taking approx. 6 hours round trip.
In fitting with its stature as a holy mountain, numerous shrines and memorials can be found along the trail. And often, Yamabushi mountain ascetics can be seen making their pilgrimage to the summit.

All three of these volcanoes are only moderately difficult to climb, and don’t require any technical experience during the climbing season.  Proper footwear and ample water and food are necessary, and mountain weather is liable to change quickly so be prepared accordingly.  But with the right effort and preparation, you too can climb one of Nagano’s active volcanoes.

Onsen in a River: Kiriake Onsen

Explore Karuizawa, Ueda, and Nagano with the Banzai Pass!